Underwater Steampunk Idle Engineer - build your mechanical empire on the sea bed, explore the idle ocean and construct incredible contraptions with cogs in the depth!Start your awesome underwater steampunk survival adventure. Build underwater factory, connect the cogwheels for the most efficient work in the idle game mode. Tap volcanoes for oxygen, drill the seabed and mine the ore.Employ octopuses and whales, explore the world with mechanical crabs, fish and submarines! Even the squirrels will help you, if you supply them with oxygen. Upgrade your incredible contraptions and connect the cogs to become the ultimate idle sea tycoon.Features of this addictive idle game• Various mad science contraptions, which can be connected in multiple fun ways. Ability to construct factory machines makes this game stand out among standard idle clicker tycoon games• You start in a small research station at the bottom of an ocean and work for survival in the idle ocean, but then you expand down, up, left and right• Tutorial gives you the basic concepts, but to ultimately succeed you must be a real researcher and uncover hidden gameplay mechanics• Engines will work while you are away, producing you idle cash• Big community in Discord: share your creation to 9500 group members• Contains only rewarded ads, which are launched by the player to increase earnings• Game works in offline mode without internet connection• Receive your daily reward by catching a submarineThis is the Underwater, world of Steampunk Idle Spinner series. The first version of idle game with spinning cogwheels was made during a 3-days gamejam. The Underwater world was the most demanded by players' votes. This world introduces many new concepts unique to the series. They are: • Reworked game engine with "pins" concept, which let design even the most bizarre machines interactions and contraptions• Resources production chains. Money is produced from air, various gases can be combined to create new substances• Playable area expansion. Sideways expansion is performed with clockwork crabs and submarines, upwards expansion: with main base upgrades and downwards: by drilling the seabed• Wide usage of taps together with spins for interaction with machines. Tap tap to mine faster• New objects are not only bought, but also discovered (treasure chests, more underwater volcanoes, ore deposits)• Machines purchase interface is the most convenient here.Players continue giving new suggestions, which eventually appear in the gameAvailable machines and entities:• Underwater volcano - produces oxygen or other gases• Cog 2:1 - increases rotating speed, basic for idle factory building• Hammer - automatically hits the attached machines• Clockwork engine - spins the cog it while you are away• Tap accumulator - stores your taps and transmits them to the coins• Bubble duplicator - steampunk building which duplicates the bubbles• Clockwork crab - discovers new territories for you• Drill - as you spin it, drills down, finds the deposits of ore and produces coins• Mechanical fish - transports resources to your base• Octopus - extracts tentacles and spins cogs• Air pipe - transports air• Whale attractor - emits infrasound, which attracts whales• Squirrel wheel - powerful engine, when fed with air bubbles• Water filter - filters gold from the water• Gas mixer - mixes air with the red gas and produces green gas• Base booster - gathers red or green gas and boosts your base• Treasure lootbox - you'll find it occasionally on a seabed. Tap it do get some gold• Submarines factory - floats in the water, as you spin its cog, will produce Scout submarines• Scout submarine - expands your visible idle ocean aquatoryYour idle ocean colony is inhabited with an aquanaut, inventor, capitalist and biologist. Each sea hero is on a quest of survival and base building. They can find lootcrate, tame a whale or build an underwater base together.
Read More 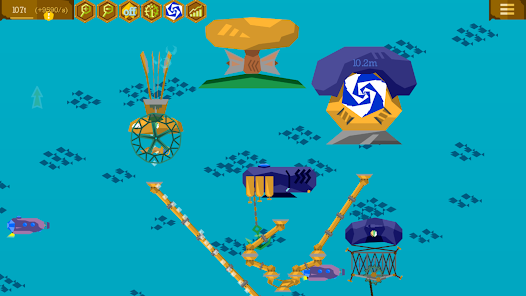 Enter the game to get a lot of money

Sea Cogs: Idle Base Building Mod is 100% safe because the application was scanned by our Anti-Malware platform and no viruses were detected. The antivirus platform includes: AOL Active Virus Shield, avast!, AVG, Clam AntiVirus, etc. Our anti-malware engine filter applications and classifies them according to our parameters. Therefore, it is 100% safe to install Sea Cogs: Idle Base Building Mod APK on our site. 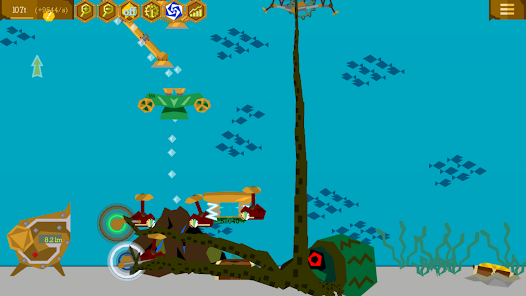